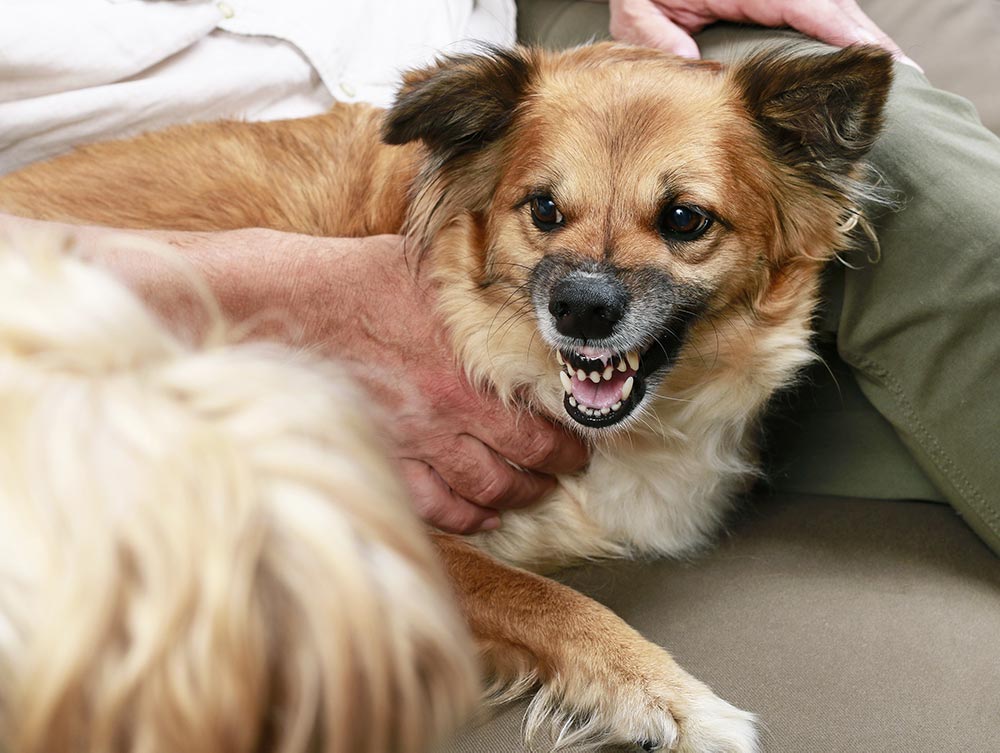 Rescue dogs have a special place in my heart. All three of my pets are rescued. Sometimes rescue dogs come with an unfortunate and undisclosed backstory. Aggression is a common tell-tale sign that emerges, sometimes after a few weeks of adoption.

Being devoted, compassionate human beings, most pet owners don’t want to give up on a relationship they have just begun to build – the dog is a member of the family before they even walk through the door. But how do you deal with a seemingly “abusive” family member? It would be a mistake to underestimate the seriousness of the situation. It is dangerous to have an aggressive dog in the household – the risk of a serious attack or mauling is real.

What’s the best way to keep the family and rescue dog safe? Here’s how Lucy did it.

Lucy was a proud owner of a German Shepherd called Harry. She had grown up with other German Shepherds and was very familiar with this breed and generally dogs. This big hearted woman had the capacity to love even more and decided to adopt a rescue Husky called Rich.

Very early on Rich began demonstrating behavioural issues. There was clear aggression in some specific situations directed towards the owner and also towards Harry – lunging, baring teeth and even trying to bite – clear red flags!

Perhaps it was because of Lucy’s lifelong experience with dogs that she immediately realised she needed professional help. There was no way she was going to risk any attack on her household.

She wisely decided to first see her vet.

I was smitten by Rich the moment I set eyes on him. Huskies are beautiful, majestic looking animals. They stand tall with pride and have an inspiring aura about them. Rich was friendly and curious, sniffing about my consultation room.

But the moment I tried to examine her, Rich began showing signs of anxiousness and aggression. She obviously felt insecure and began trying to nip and bite.

While I had a strong suspicion that the issues were trust related, I had to be thorough. I first did a head to toe examination to ensure that Rich was not acting out of pain – hidden injuries can often cause grumpiness in dogs. Thankfully, Rich was free from injuries..

Then, my team ran a blood test to rule out hormonal causes. Imbalances in the thyroid hormone can sometimes lead to aggressive behaviour. But the blood test came back clear.

After ruling out any external and internal biological factors, it became clear that Rich’s aggression stemmed from psychological reasons. She had possibly been beaten / hit by previous owners and was now insecure and mistrustful of people. Whenever she felt threatened, she was trying to behave in a way to protect herself from further harm.

I prescribed anxiety and depression medication in combination with some environmental modifications and within less than 8-weeks Rich was responding very well. Anxiety medication is often misunderstood by pet owners. While the treatment course is usually life-long, it is extremely safe for dogs from both medical and psychological standpoint. Rich, like most other dogs on this medication, was not just calm but happy. She did not become robotic or sleepy and inactive as most people think.

Today, more than 1-year on, Rich is 100% fine with people and other dogs. The signs of aggression have completely disappeared. Lucy, her family, Harry and Rich all live together.

Happily ever after is definitely within reach!

Pet owners trust us to look after the needs of their beloved companions. We are specialists committed to delivering the very highest of veterinary care and affection.